A fishing boat with a cool sail made of white blocks is loading and unloading. A bustling harbor market. The weapon shop in the foreground is mostly bakeries and merchant stalls. The building can be divided into parts. There is also a harbor master’s private room. Minifigures include a harbor master, a garrison, a blacksmith, a baker, an eastern merchant, a fisherman and a farmer selling wine.

According to him, this design will be enjoyed by fans of both Castle/Medieval and Pirates. He focused more on everyday scenes than combat elements.

A building set for adults that uses the sea is rare

Recently, there are many expensive products, but among them, when it comes to sea-themed sets, the main ones are the 21322 pirate island released by Lego (R) Idea in 2010 and the Lego (R) creator’s 311039 pirate ship-like ship. Lego (R) Ninjago is probably the only building set that uses seas and harbors.

In the Lego (R) idea competition, a naval fort has recently entered the review, but it has not passed. This work expresses everyday scenery instead of combat, so I think it is suitable for LEGO (R) idea products. I look forward to passing the review! 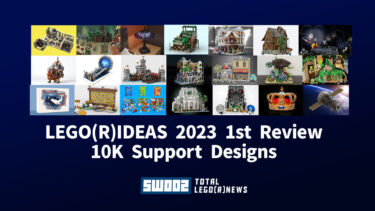