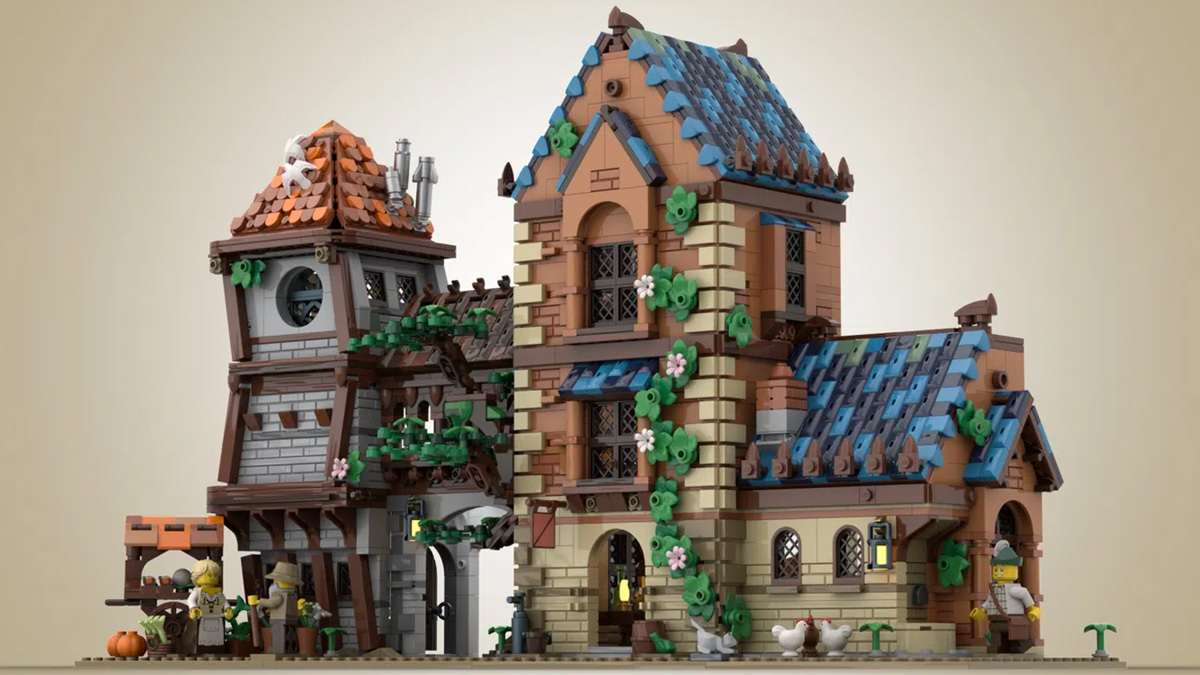 With 10,000 support, it is confirmed that it will advance to the 2nd LEGO idea commercialization review review in 2021.MEDIEVAL TAVERN：LEGO IDEAS

Popular theme A bar building set in the Middle Ages. It consists of three buildings: a stone building with red tiles, a wooden passage, and a red brick building with blue tiles. Are the parts of the roof with holes rare parts? I’m ashamed to say that I’ve never seen this part. 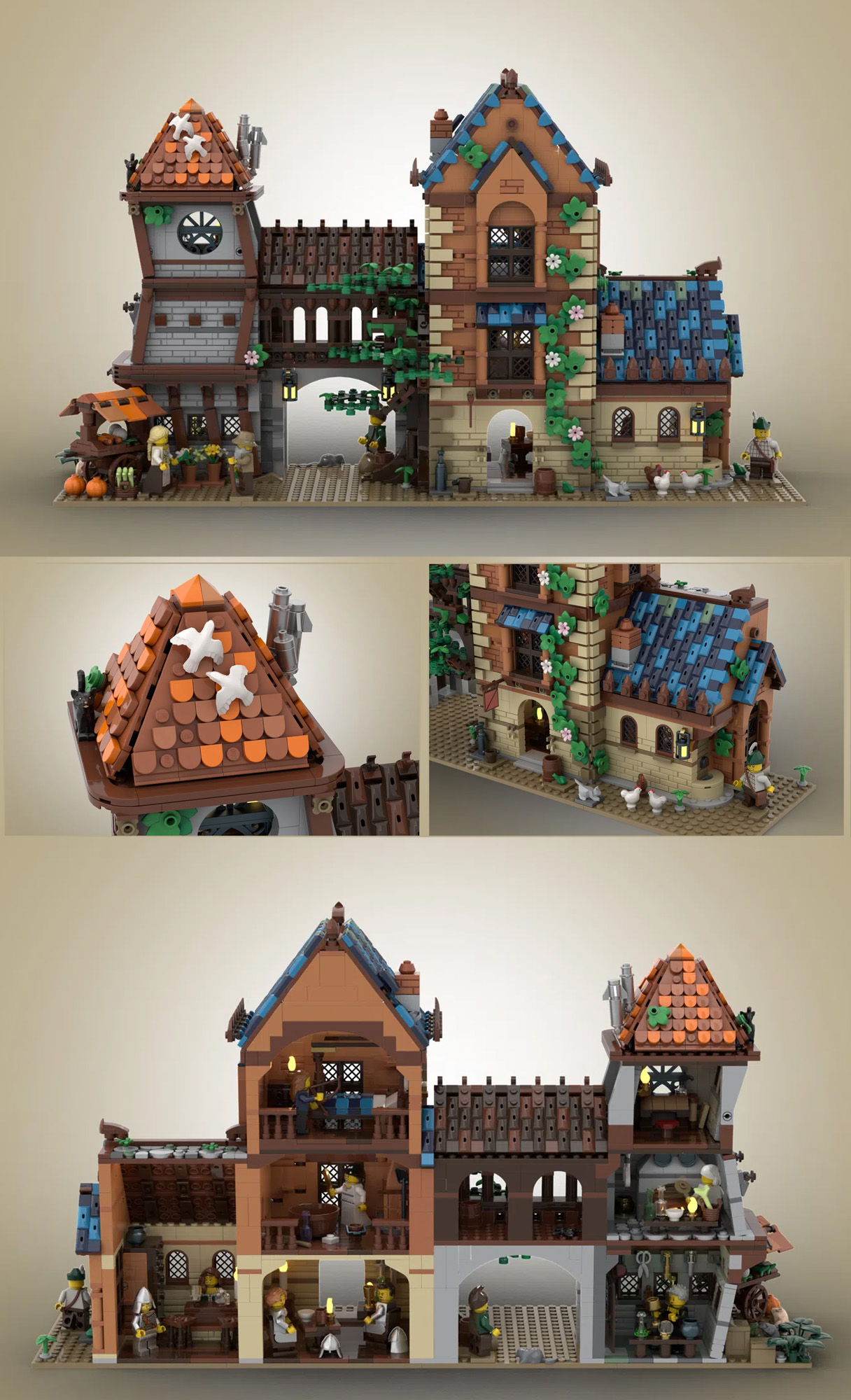 The blue tile building has a tavern seat on the 1st floor, a bathroom on the 2nd floor, and a bedroom on the 3rd floor.

In the old days, it would have been normal for homes and stores to be together. There is a function in the bathroom, but when I wash my body, I may have just wiped my body in it. 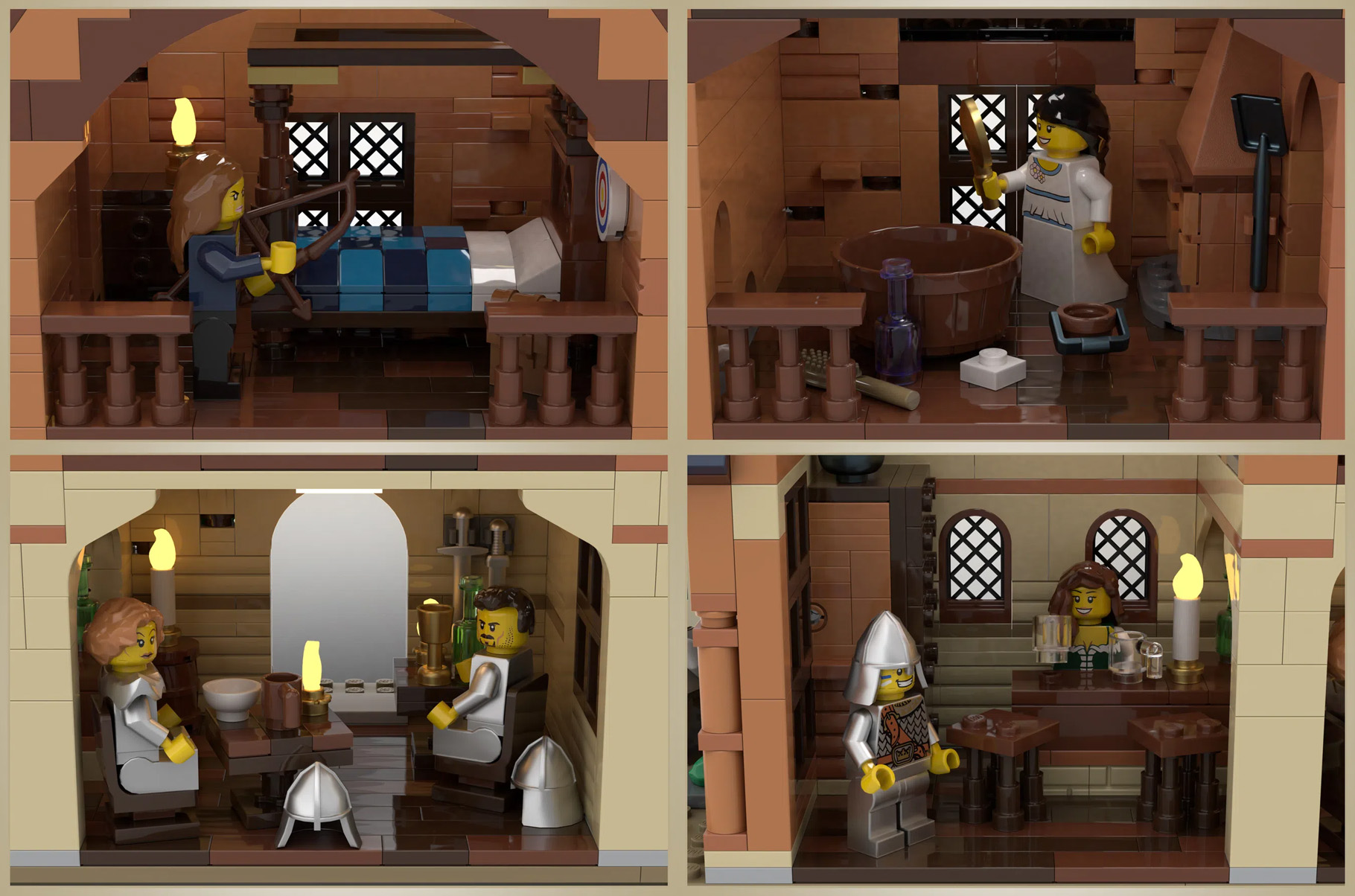 The stone building has a unique design with slanted walls. I don’t think that such an architectural style was common in the Middle Ages, so the author probably added the arrangement. The 1st and 2nd floors are a potion mixing room and a kitchen, respectively. 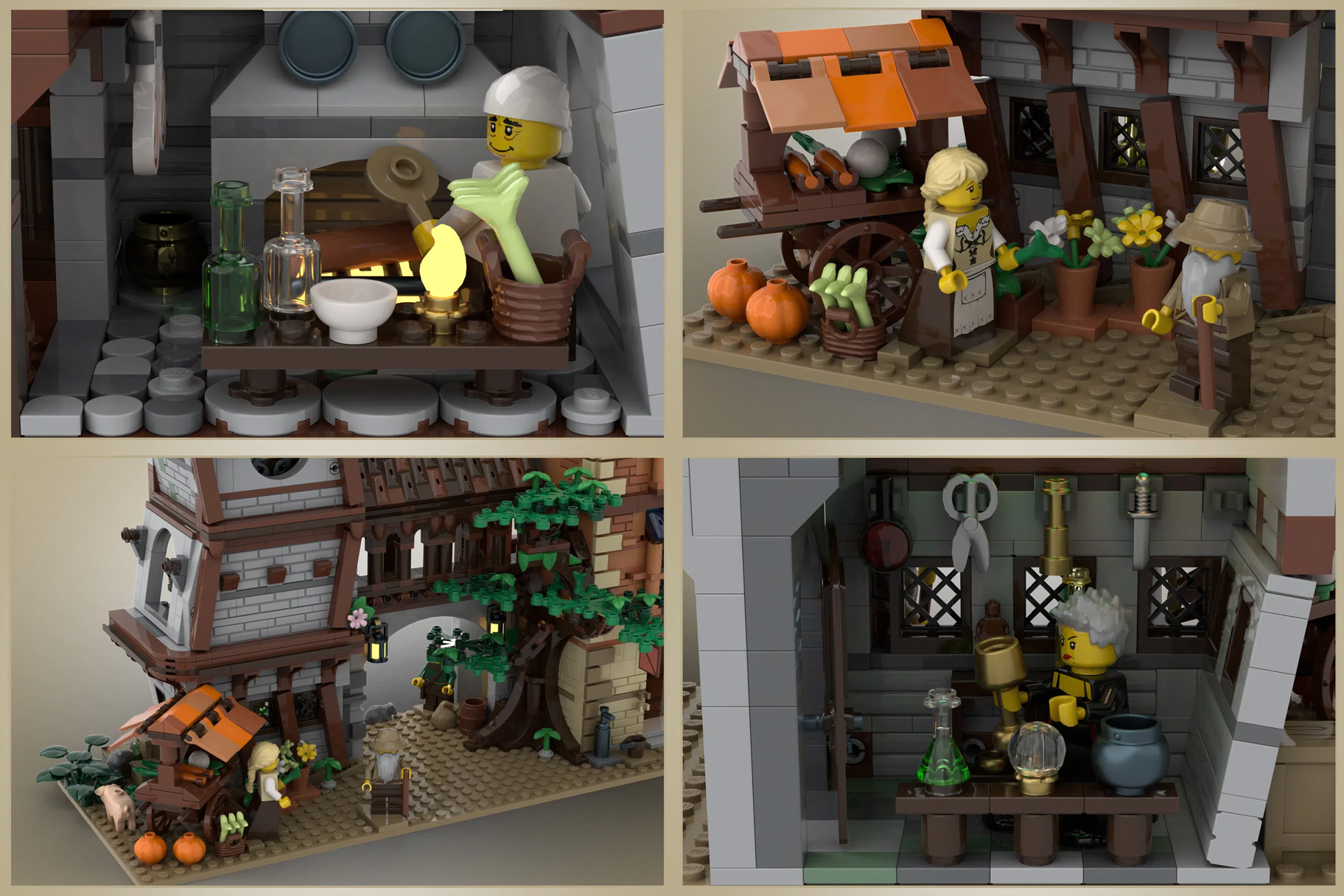 According to Wikipedia, taverns (bars) first appeared in Europe around the 11th century (1001-1100), and in many cases the king and other powerful people monopolized management rights and beer brewing rights.

The customers who drink with this design are like soldiers because they wear armor, but the impression is that there are many soldiers in the pubs that appear in the medieval world of light novels and anime works. At that time, there was less entertainment than it is now, so the soldiers may have been immersed in the tavern.

What kind of beer were they drinking?

Given the climatic conditions, wheat would have been cultivated more than grapes in Germany, so it is inferred that beer was the main source of alcohol in medieval German pubs.

The beer at that time was a top-fermented ale with a fermentation temperature of 15 to 20 degrees, which is higher than that of the current mainstream lager. The wheat is harvested in early June, but according to Hankyu Travel International Co., Ltd. , Germany averages in June. The temperature is about 17 degrees.

Beer was brewed mainly in winter to prevent spoilage, but it may have been brewed in June due to the problem that fermentation does not proceed easily when the temperature is low.

State of the bar at that time

Dutch painter Pieter Bruegel the Elder has left a picture of an old banquet.

The title of this painting is “The Peasant Wedding”, so the customers are also farmers, not the taverns. Furthermore, Bruegel was born after 1500, so it is not strictly medieval.

However, I don’t think the containers and cups for sake are the same as in the Middle Ages. Since glassware would be expensive, it turns out that the container and cup for liquor were irregularly shaped pottery. It was impressive that the craftsmen were surprised at the glass beer mug made in the size that was brought in from the present age even in the animation called Nobu, a different world tavern.

If the setting in this painting is Bruegel’s hometown of the Netherlands, the liquor the man on the left is pouring into a glass from a jar is likely to be beer. The jar is kept indoors at room temperature, but in the case of ale, it wouldn’t have been a problem if it wasn’t cold. 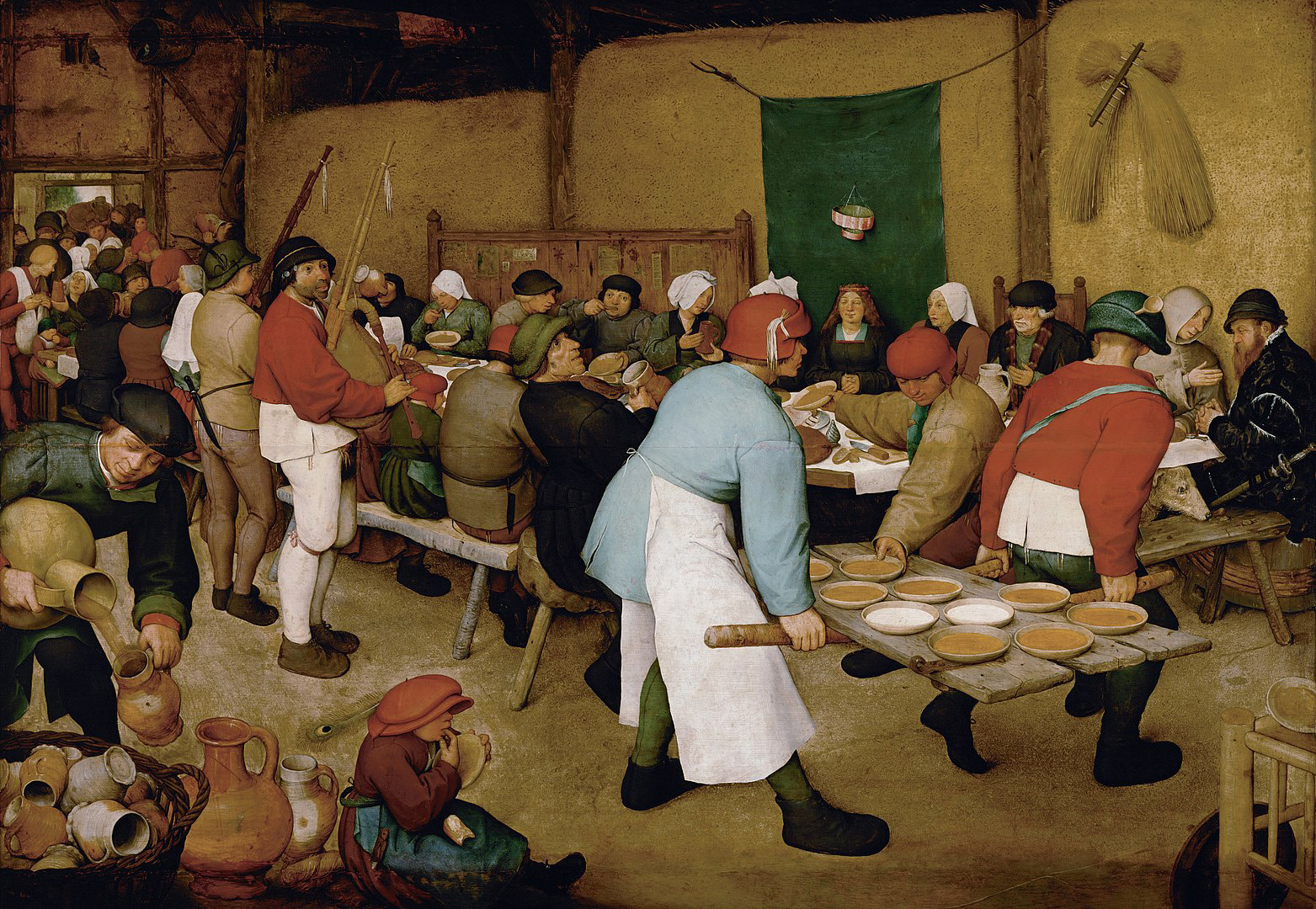 Can Pass the Review

The author LEt.sGO reveals other fashionable buildings and vehicles. During.

The medieval series is popular and many works have gained 10,000 support and are being reviewed. However, since the medieval Kajiya has recently commercialized the LEGO idea, there is no high probability that another medieval work will be commercialized from the idea.

There are a lot of medieval building works, but I don’t think it’s the theme of the nature of commercializing a number of ideas. Since the medieval castle will be released by the creators in June 2021, LEGO will probably have some plans for the medieval castle on its own.

As I write every time in the building work introduction article, the idea tends to make strict judgments on building designs other than copyrighted materials, let alone this work is bar , so Lego I think the possibility of commercialization is infinitely close to zero.