When I lived in Okinawa, I used to bring a radio and watch the aircraft at “Kadena Road Station” in front of Kadena Air Base. Mainly airplanes, but I could see helicopters. 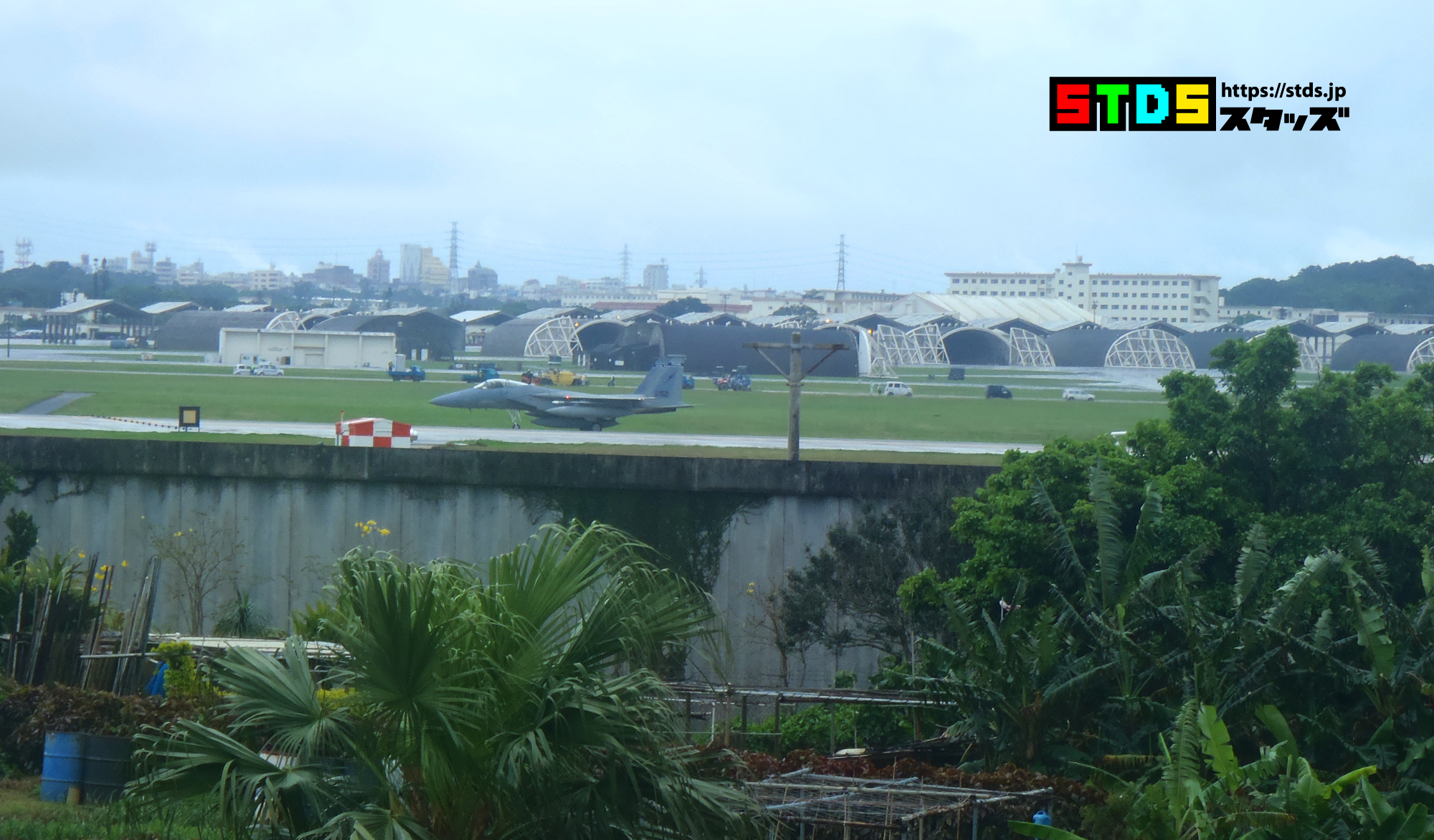 Due to such circumstances, I am not particularly familiar with the aircraft, but I am interested in aircraft so much, so I bought a Black Widow helicopter when it was cheaper at Amazon’s time sale.

Lego pre-sale over a year ago

The release date of the movie Black Widow was originally scheduled for May 2020, but it has been postponed several times due to the influence of the new coronavirus.

The publication date of this article as of March 2021 is April 29, 2021 in Japan and July 9, 2021 in the United States. Postscript: After that, the release date in Japan was postponed to July 9.

The LEGO Black Widow helicopter will go on sale March 1, 2020, in line with the initial release schedule. As a result, it was released more than a year before the movie was released.

As of 2021, in major western countries, the large transport helicopters of tandem rotors with two rotors are mostly Boeing CH-47s (commonly known as Chinooks), so there is no doubt that the Black Widow helicopter is also modeled on the aircraft. 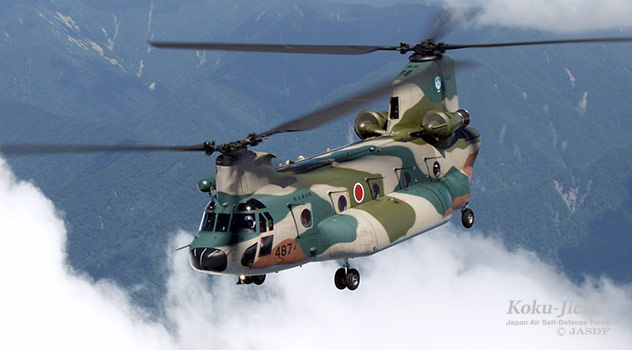 Lego’s fuselage also has rotors on the front and back, and like a chinook, three large blades are attached to each. Impression that the wings are larger than the actual aircraft.

Since the Chinook rotates the front rotor counterclockwise and the rear rotor clockwise, there is no need for a tail rotor to stabilize the direction of the single rotor aircraft. 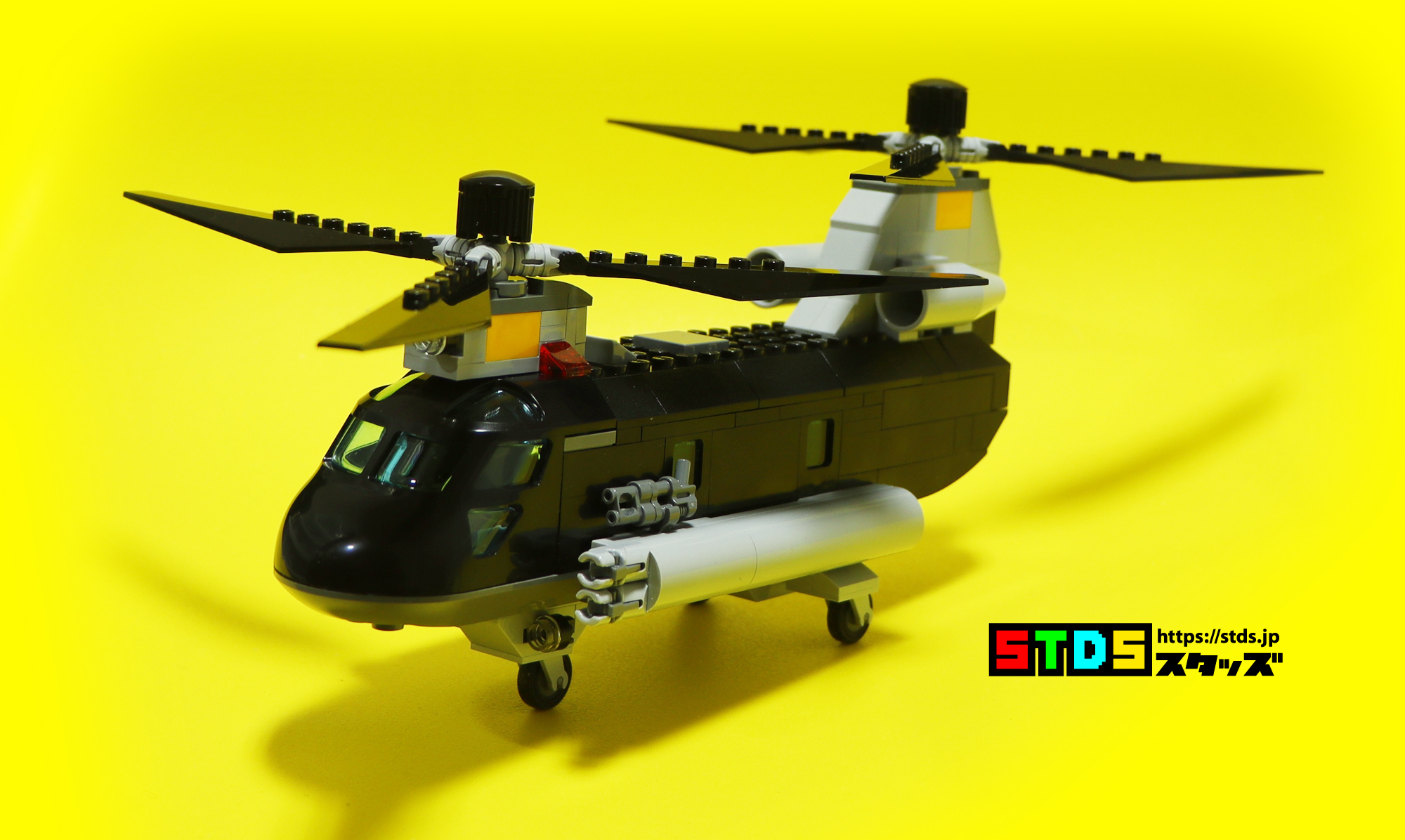 When the Chinook is improved and remodeled, an alphabet is added after the CH-47, but in this article it is collectively called the Chinook. The CH-47J and CH-47JA deployed in the Self-Defense Forces are licensed by Kawasaki Heavy Industries.

Is military aircraft OK for movies?

Recently, the technique “42113 V-22 Osprey” was suspended for sale just before its release, but the trigger was a protest by a German peace group against the commercialization of the Osprey, which is operated as a military aircraft.

The Osprey may also be commercialized as a fictitious military aircraft that appears in Marvel movies. 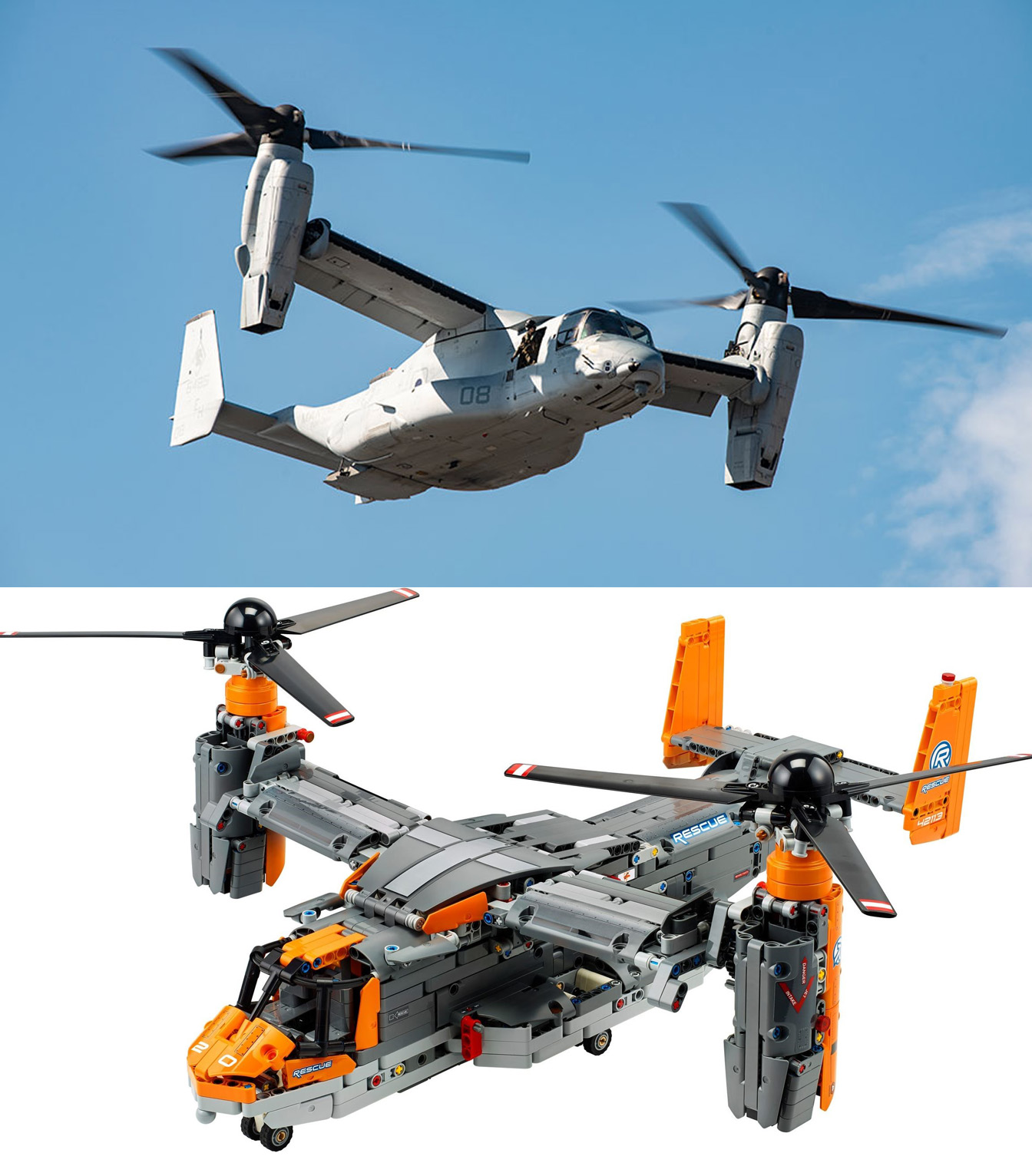 The technique series hasn’t tied up much with the movie so far, but since there are examples of the Wild Speed Dodge Charger being commercialized, it seems that the movie aircraft is also OK.

When Osprey appears in Marvel’s work, I would like to expect it to be commercialized with technique, but it has a shape that is too characteristic compared to helicopters, and it may be difficult to re-release the one that was once discontinued. I don’t think so.

For example, tanks are completely shaped weapons, so even if they appear in Marvel’s work, it will be difficult to commercialize them. If the Osprey appears in a Marvel movie, it’s likely to be in a similar position.

However, in 2013, the 60021 Cargo Heliplane, which is as close to the Osprey as possible, was released from the LEGO City series.

I think the Osprey was deployed at Futenma base in 2012, but at that time I lived in Okinawa and went to see it immediately. The Osprey has a big propeller and the flying figure is really cool.

Around 2013, when the LEGO City Osprey was released, it may be the time when the Osprey was booming.

The knob on each rotor allows you to turn the wings vigorously.

It is a “Swooshable” Lego aircraft that you can play while enjoying the atmosphere of flying in the sky while holding it in your hand. Especially strong for kids who like airplanes. 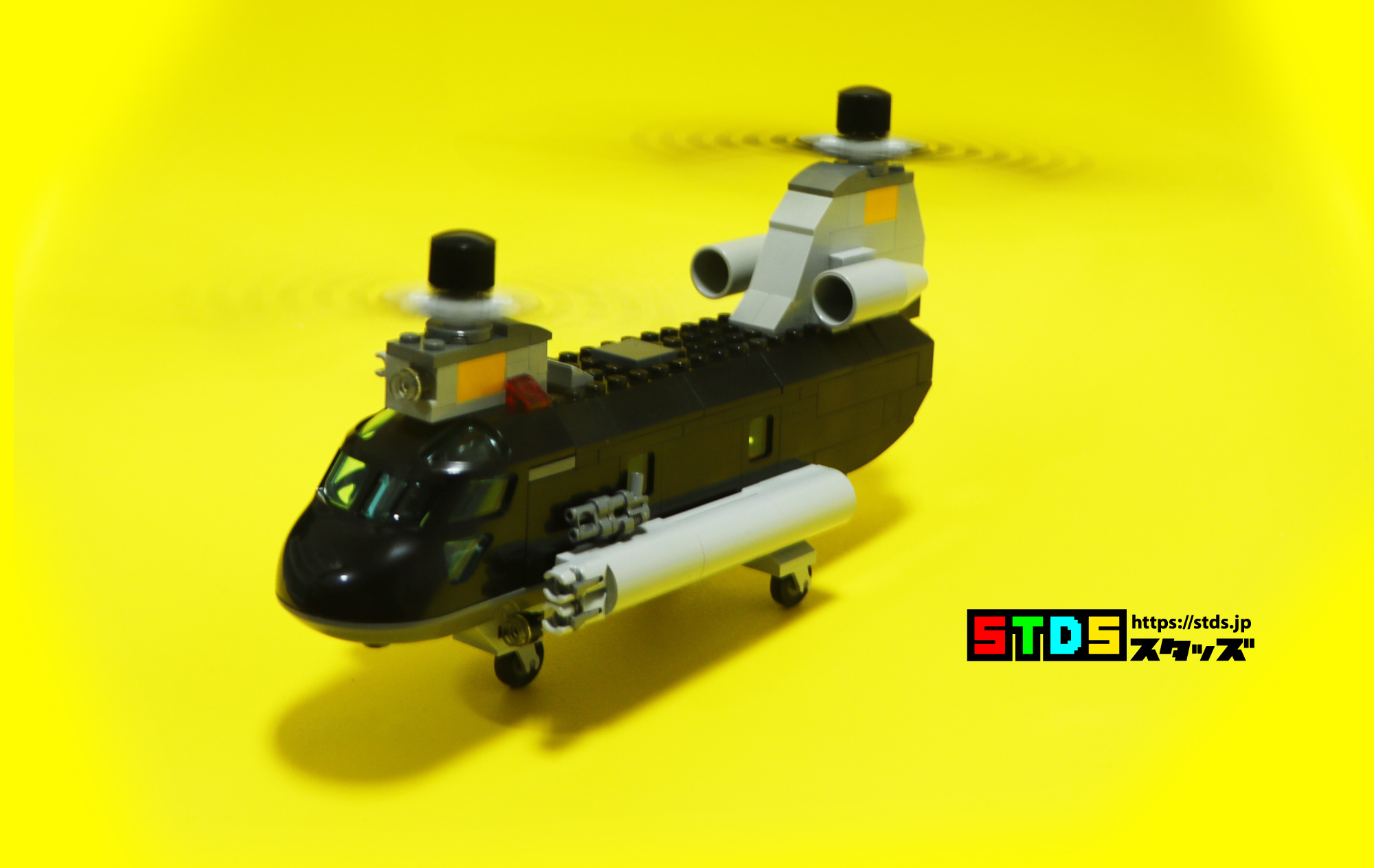 What does Swooshable mean?

Lego airplanes and spaceships that you can hold in your hand and play with are called Swooshable. It is an onomatopoeia word that expresses the sound and momentum of flying, but it is used like “This aircraft is the best Swooshable!”.

You can also reproduce the pinnacle landing, which can be said to be the true value of a tandem rotor aircraft! 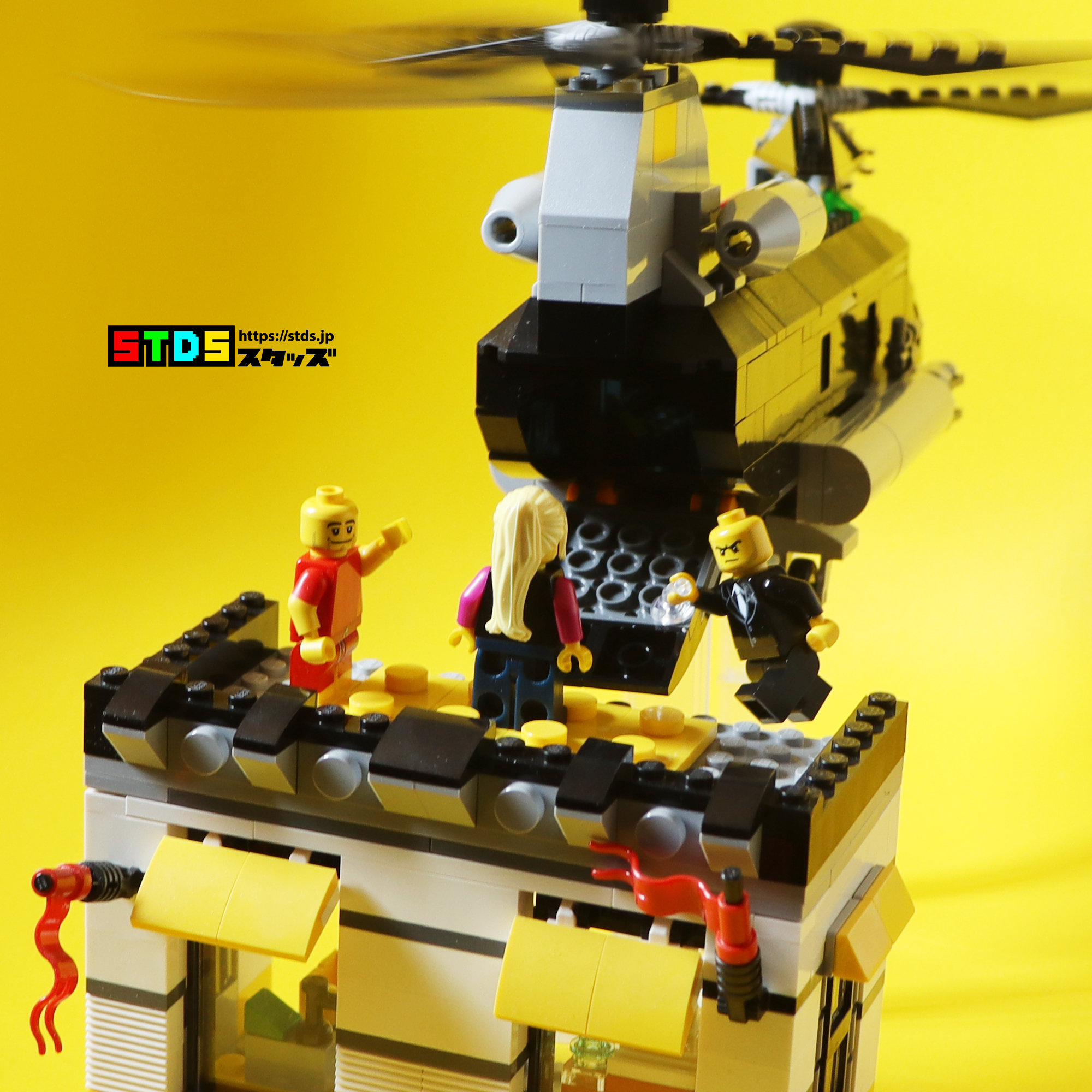 What is Pinnacle Landing?

Pinnacle landing is a flight technology for loading and unloading troops and supplies while hovering on slopes that cannot be completely landed in mountainous areas, etc., while staying on the ground in an unstable state.

Engine next to the rotor

Next to the rear rotor is an engine that rotates the wings. 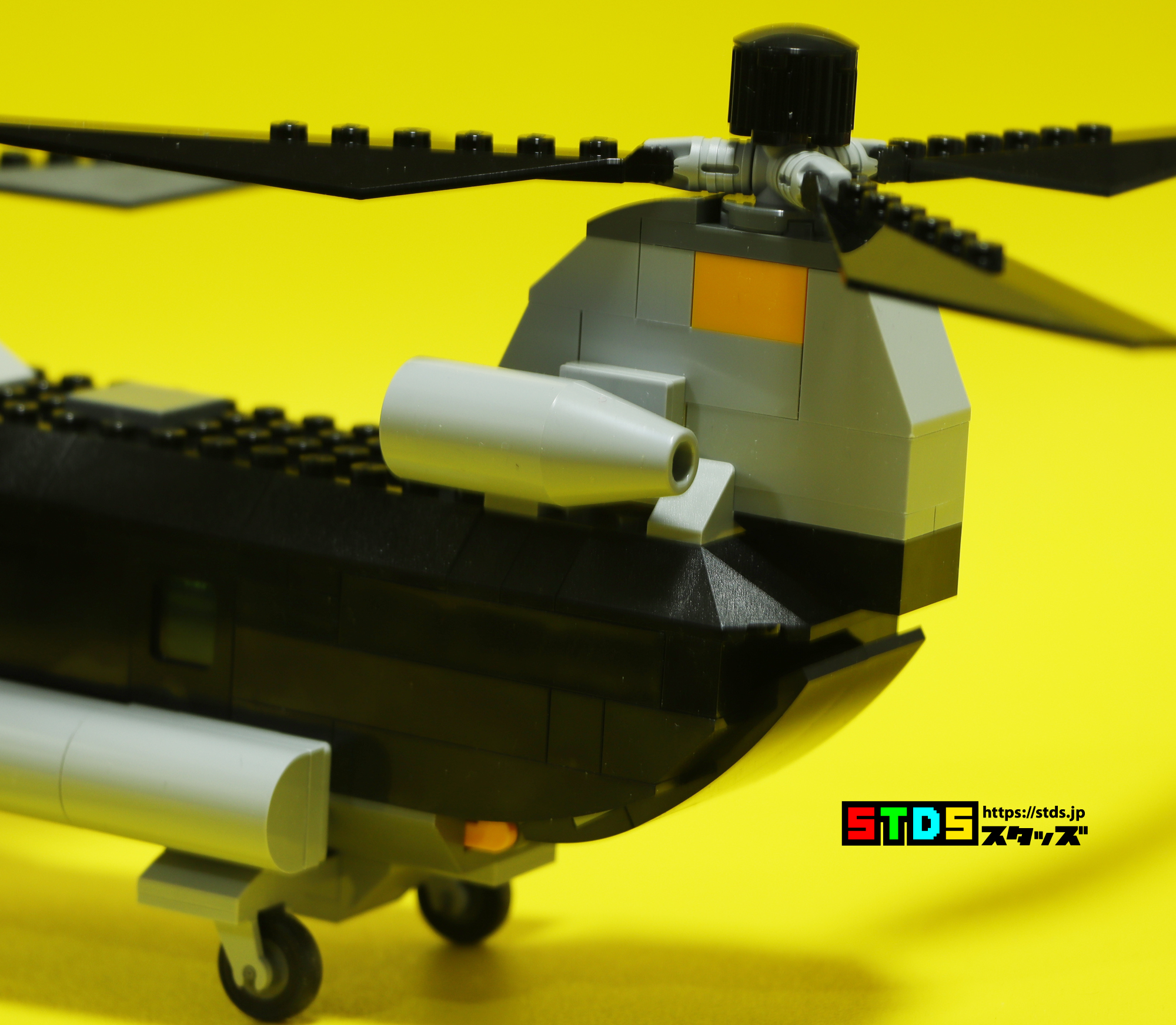 Can accommodate buggy in hatch

There is a hatch at the rear of the aircraft that can accommodate the attached buggy. The buggy has a simple structure, but the car body is tilted and it is cool. 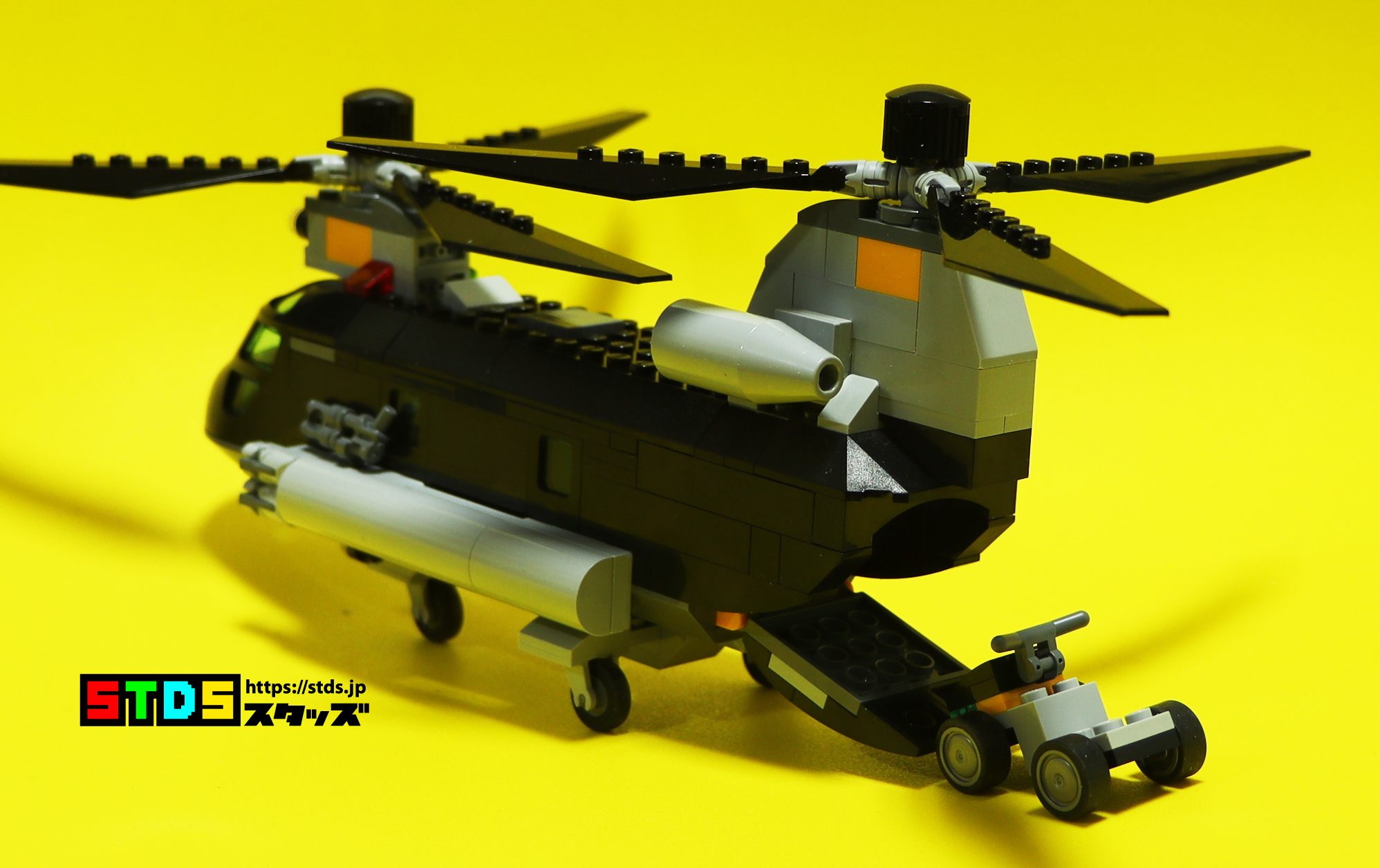 Hatch of the actual machine

Of course, the actual Chinook machine also has a rear hatch that allows vehicles to be loaded and unloaded.

The “ floor leveling device ” is used in the Chinook operated by the Japan Air Self-Defense Force. Since the slope can be adjusted to the same height as the cargo loader, loading and unloading of luggage is easy and quick. 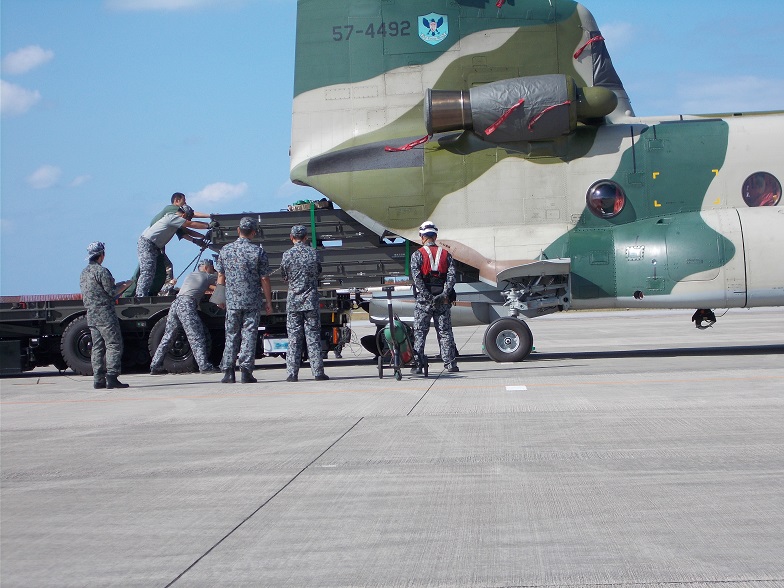 Special equipment only for the Air Self-Defense Force

The floor leveling device is a special device manufactured by Kawasaki Heavy Industries only for the Air Self-Defense Force specification aircraft, so it should not be equipped on the Black Widow helicopter.

If the device can be confirmed during the work, it can be said that the Black Widow aircraft is made by Kawasaki Heavy Industries of the Air Self-Defense Force specifications. 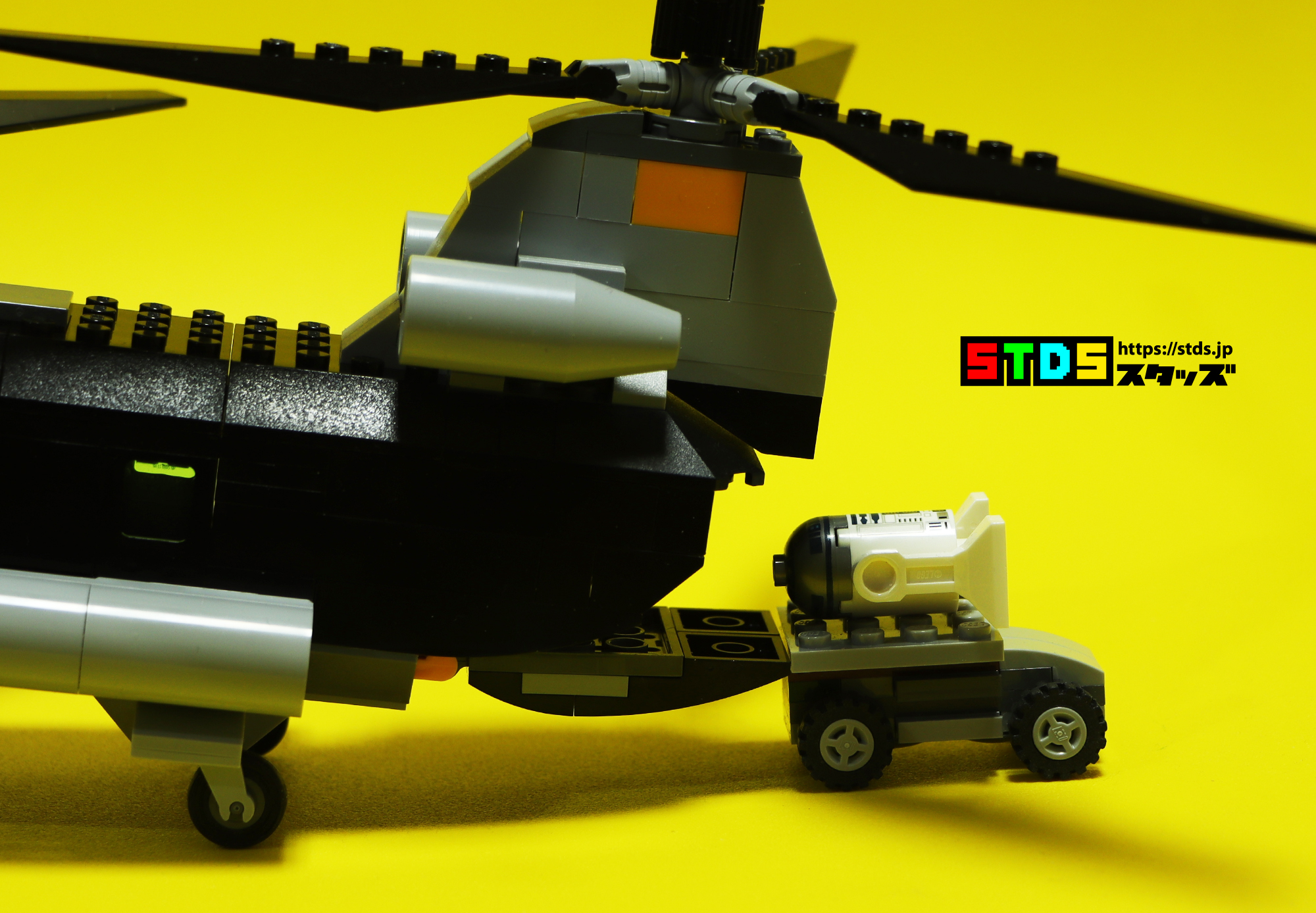 The bulge on the side of the aircraft

The bulge on the side of the aircraft is a fuel tank.

The cruising range of CH-47JA is as long as about 1,000 km, which is equivalent to the distance between Tokyo and Kagoshima. The Osprey is capable of flying about 3,600 kilometers, which is even longer than that.

The Black Widow aircraft has a stud shooter at the tip of the tank, so I’d be happy if this bulge was packed with ammunition and played a flashy action scene, but this part is probably It will be a fuel tank even during the work. 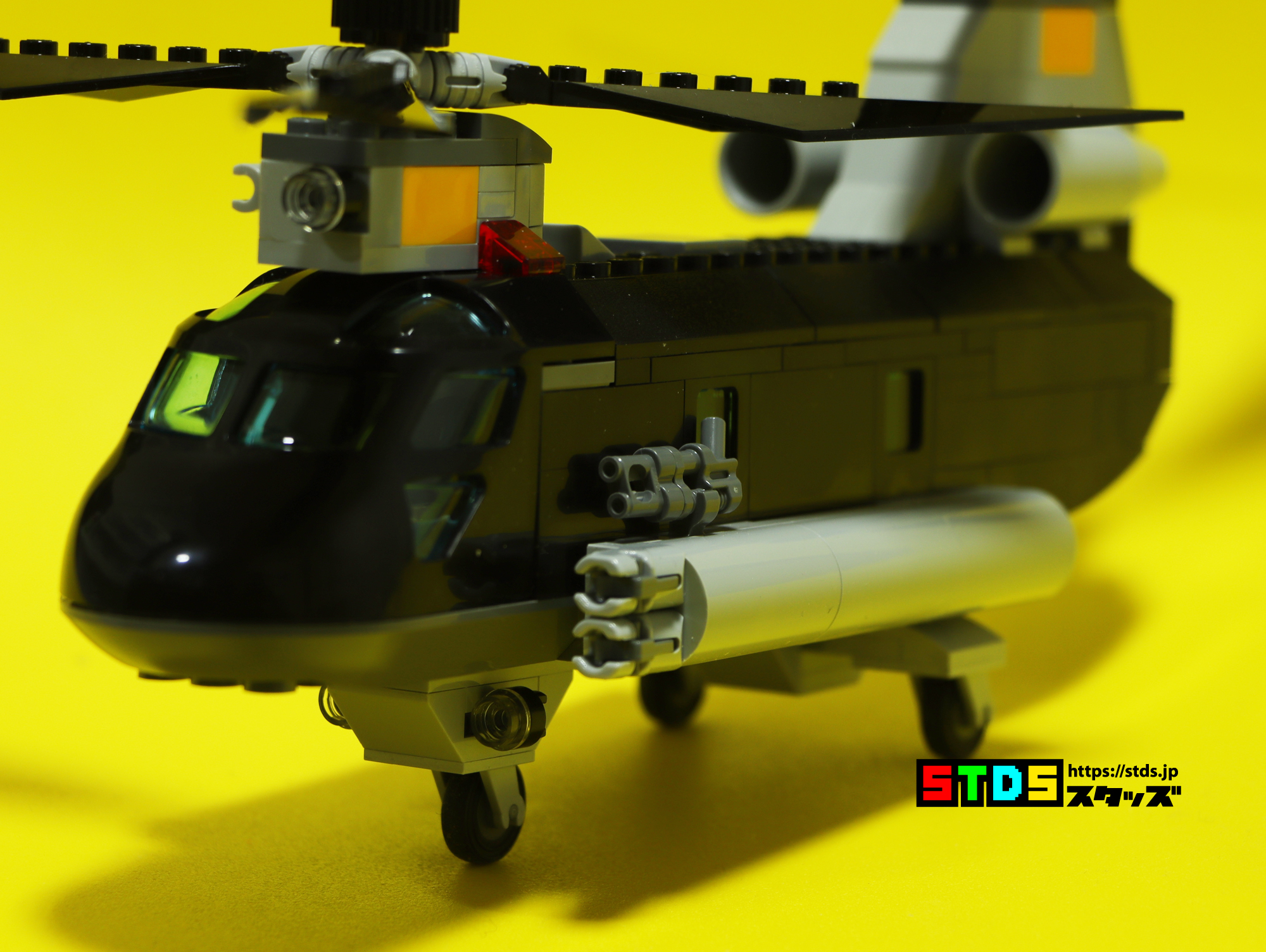 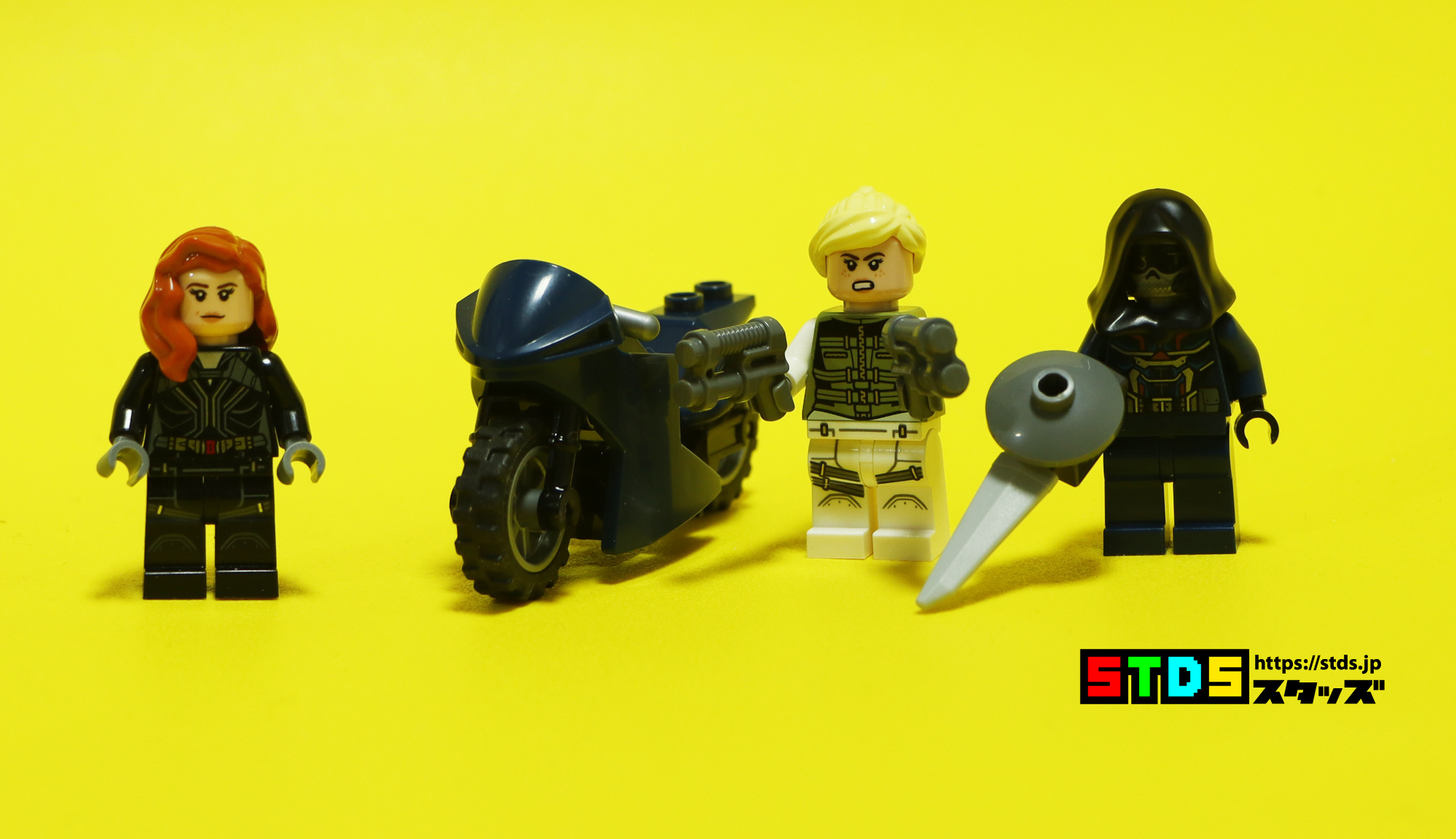 It has nothing to do with Black Widow, but I like action star Jason Statham, so I’d love to see you play with Scarlett Johansson, who is good at action. 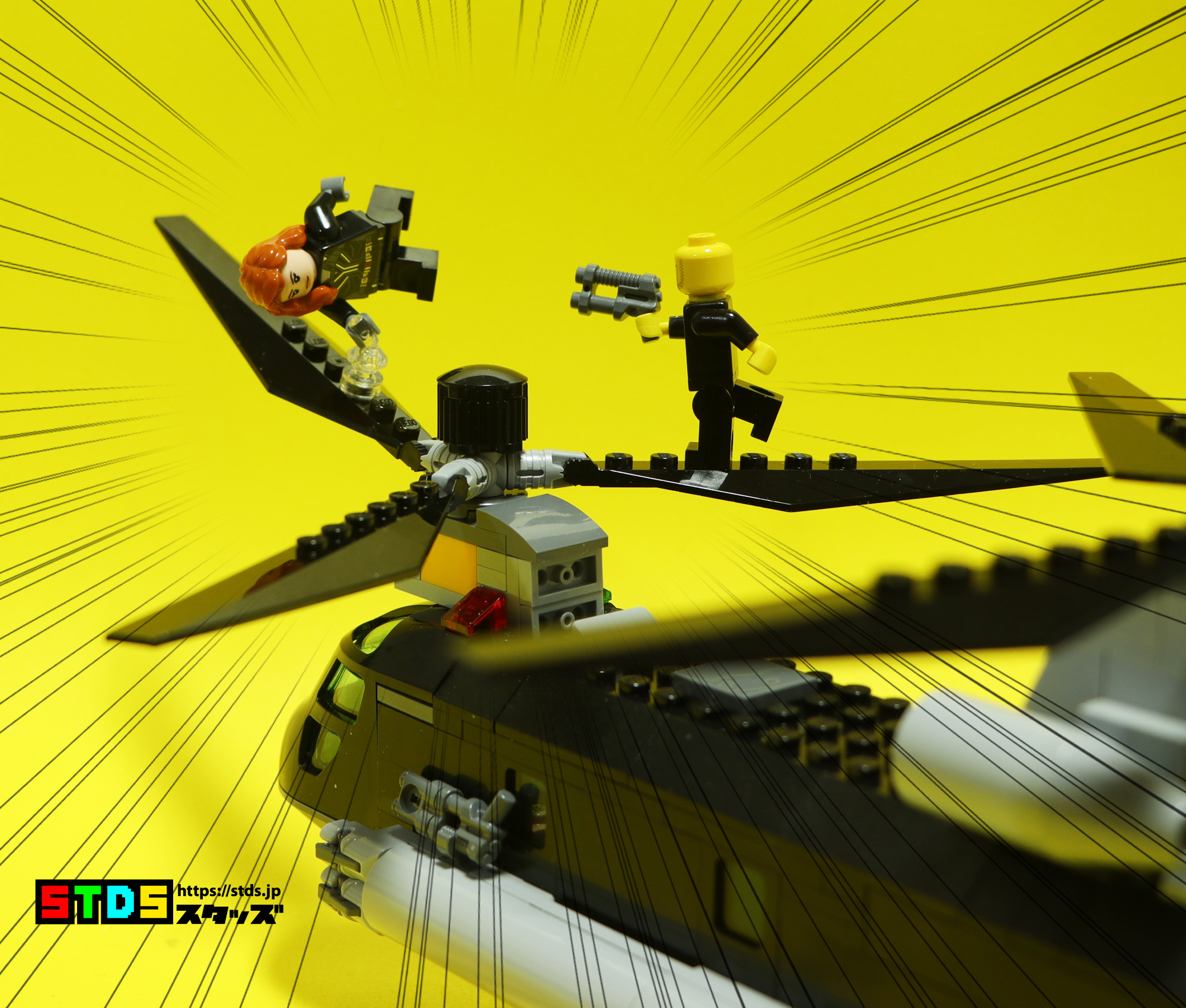 As far as I can see, the two have never co-starred. I don’t think Statham suits Super Power, so if you want to co-star, I would like to see the action in the real world.

Speaking of Scarlett Johansson’s investigators, Ghost in the Shell is the one, but I overwhelmingly like the anime version. I want you to co-star with Statham in a crime system set in the present age.

The action of two people forming a combination to confront the great evil is also good, and the investigator Scarlett Johansson who pursues Statham who is dying in the underworld is also interesting.

Finally, the customary cat scale. This set is 271 pieces and is for ages 7 and up. The size is easy to play and the size of the box is about 2/3 cat long. 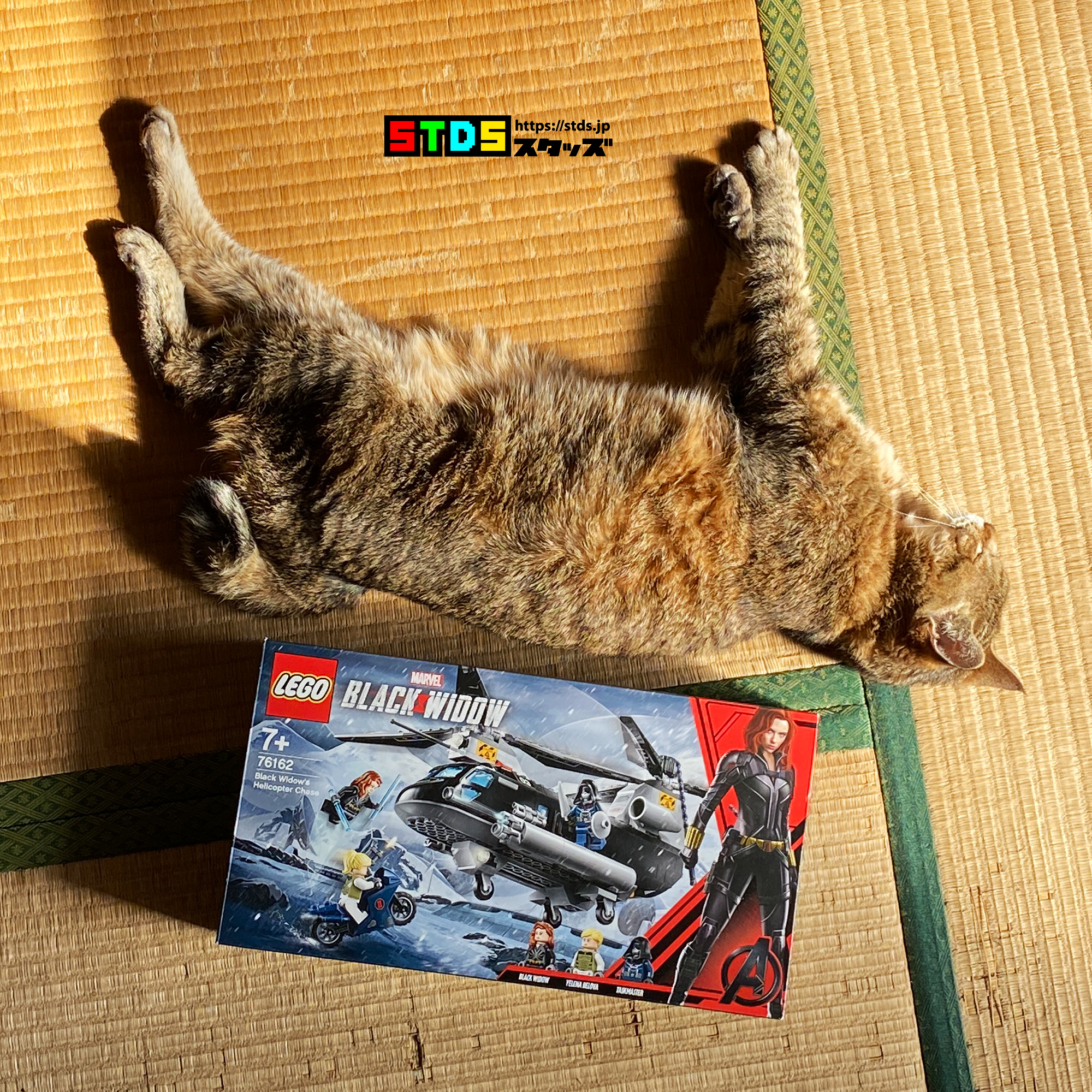 I want kids to fly in the air and play!

The aircraft is based on black, but since large parts are used for the cockpit and the roof of the fuselage, there may be surprisingly few ordinary small blocks and plates. However, I want to use the black parts after breaking them for the Chevrolet Suburban that I want to make someday. 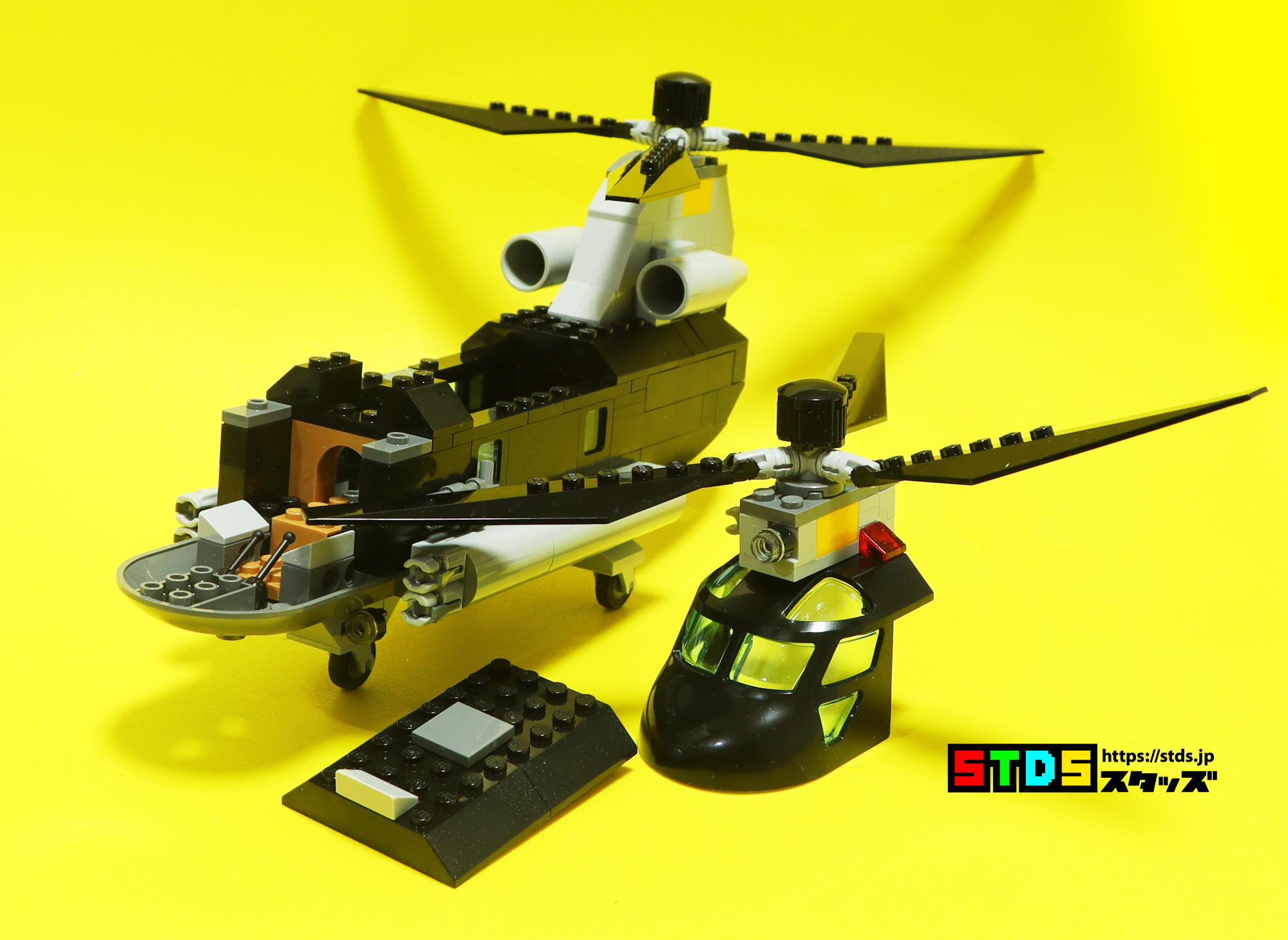